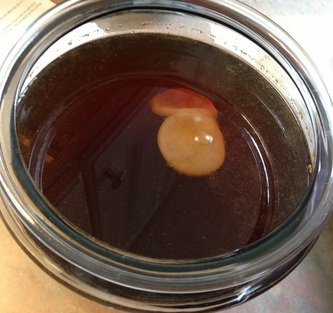 We celebrate the birth of "Queenoscobie"  Kombucha.

Here is the first Scobie scavenged from a bottle of unnamed commercial Kombucha.

We realize that Kombucha goes back many years and is not a new product, but Queenoscobie Kombucha was just born on this day, July 4, 2014, when your old friend Queenosabe and her old friend Loubee1 decided to take Loubee1's fledgling Kombucha Kitchen to a new level.


What is this new level?
We haven't quite figured that out yet.
It isn't for profit; it isn't for charity, but as near as we can figure it out at this time it is for FUN. 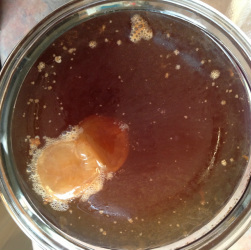 Our Kombucha Story
by RTH and NLK Brown


In 2010 we visited our son Evans in Los Angeles. He and his friend Won, pronounced Juan like the Hispanic name, had been brewing up Kombucha. We had never heard of Kombucha back home in Indiana and Nan Lou, aka as Loubee1, developed a taste for it. Evans told us all we had to do was buy a commercial Scobie, sometimes spelled Scoby or Scobey, and we’d be in the Kombucha brewing business. That’s not a business as like in a commercial endeavor, but more like a DIY project or hobby. Of course you could buy it in some stores for four or five dollars a bottle. We decided to attempt to make our own when we got home.

Well it wasn’t until the spring of 2014 that just buy chance we bought several almost four dollar bottles from a local health food store and found the thing called a Scobie starting in the top of a bottle. Nan Lou carefully fished them out. They were about the size of half dollar and joined at the hip, so to speak. NL was hot to enter the Kombucha brewing brethren and she did a little research and found several recipes and put her salvaged Scobie to work in a wide mouth gallon jar found at the Container Store.
The basic black tea.                           A ready to go to work Scobie.               A completed Konbucha brew. 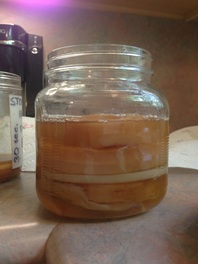 We started brews 3 and 4. One seemed to have a lazy Scobie and after a day or two NL added a second Scobie to the jar. It started working right away and even shamed the first one in the jar to get its Scobie rear in gear. These two brews were allowed to go an additional day or two and they ended up being the best of our Kombucha production.

By now we have had to move several Scobies into one residence jar which is called a Scobie hotel.


Never having the exact same taste might be discouraging to some, but we find it a little exciting not knowing whether a brew will be weak, strong, or just right to our taste buds.